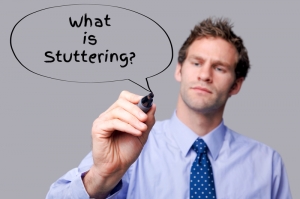 Many individuals find our website when asking the question, “What is stuttering?” The most common stuttering definition is as follows; Stuttering is a communication disorder characterized by a disruption in the forward flow of speech that usually includes physical tension, secondary behaviors, avoidance of communication, and/or negative reactions on the part of the speaker. The disruptions evident in a person who has a stuttering disorder, which some would consider stuttering symptoms or types of stuttering, include the following:

• Repetitions: repeating the same syllable, sound, word, or phrase
(e.g. “g-g-g-going like this”)

• Audible Sound Prolongations: holding on to the production/vocalization of a sound for a longer duration than is considered typical
(e.g. “goooooing like this”)

• Inaudible Sound Prolongations: no sound is produced and then a “burst” of tension is released as the sound, word, or phrase is being vocalized
(e.g. “—–GOing like this”)

Speech-language pathologists listen for the type and frequency of disfluencies as well as a number of other factors when evaluating speech patterns before diagnosing a stuttering disorder.

When reviewing stuttering facts, many wonder if there is a difference between stammering and stuttering. The reality is that stammering and stuttering are synonyms, so both words have the same meaning. Stuttering is more widely used to describe this communication disorder compared to stammering, in part, because the term “stuttering” is used in the International Classification of Diseases, Ninth Revision, Clinical Modification (ICD-9-CM) codes for fluency disorders.

If you are still asking the question, “What is stuttering?” read the What Causes Stuttering page.